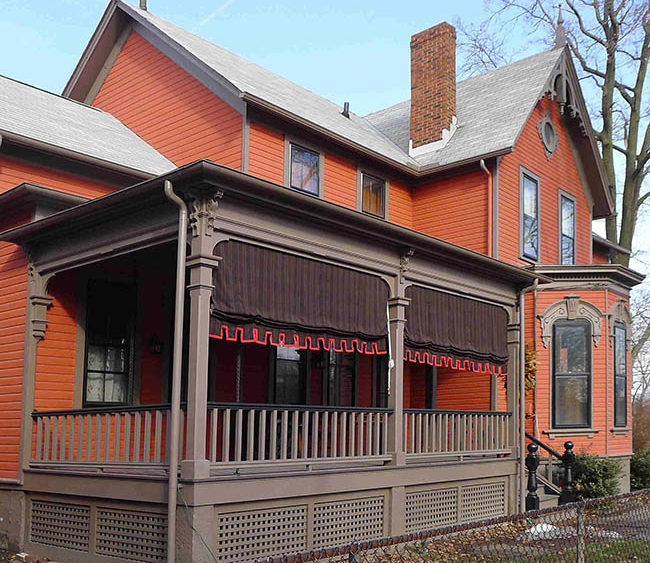 The house occupies a prominent corner adjacent to Lincoln Park in the Tremont Historic District. The extension of a porch and the substantial remodeling of the master bedroom suite distinguish the project as remodeling rather than historic preservation, though many of the details and materials were reused or recreated to match the originals.

On the exterior, trim was repaired and painted, roof finials and newel posts were reconstructed from historic photographs. The side porch was expanded and reroofed, preserving and reusing the existing porch columns, beams and brackets. New porch floors, steps and hand railings were installed. The design intention was to make the new work compatible with the existing house and to adhere to principles within the Secretary of Interior’s Standards for rehabilitation. This included reusing exterior trim where possible and leaving as much of the built-up paint surface intact rather than stripping or aggressively scraping the exterior siding and trim. The goal was to preserve as much of the character and substance of the house as possible while replacing rotten or missing elements. The installation of the porch handrails at the appropriate 32” height required a variance from the Board of Building Standards. Less effort was made to distinguish the new work from the old.

On the interior, the historic plaster cornice in the front entrance hall was repaired where it had been damaged and a new ceiling center ornament was created for around the light fixture. A new master bedroom suite was created from what had originally been two bedrooms. The second bedroom had been remodeled in the 1980’s into an awkwardly large, open-plan bath, laundry and closet. An alcove where a Murphy bed had once been installed became a shallow walk-in closet. Two reclaimed French doors that were found in the basement were fitted with mirrors and installed as if they were the front of an armoire. A new master bathroom, water closet, shower and laundry were created in the remaining space. A new, smaller plaster cornice was run-in-place from a template that was created using the forms from the larger cornice in the entrance hall. The goal was to make the master bedroom suite of rooms feel as though they were a part of the original floor plan of the house.