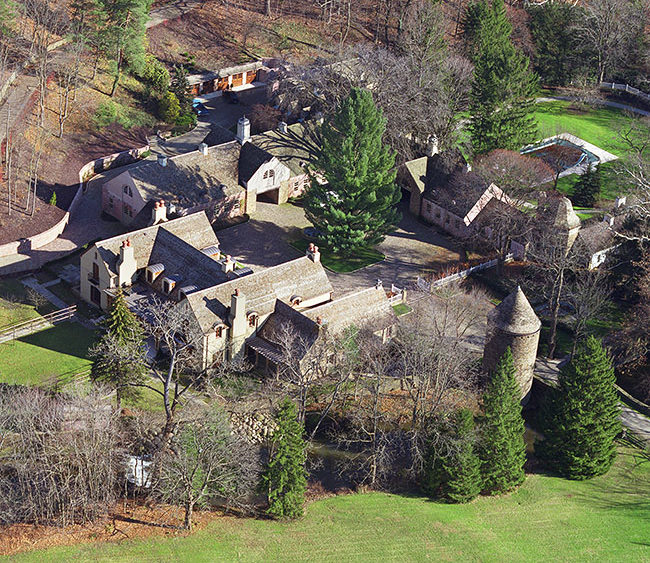 New York architect, Mark Ferguson teamed-up with David Ellison, the architect of record, to design and construct a new home in the context of a picturesque grouping of barns and caretaker houses. The complex of buildings was originally designed by Philip Lindsley Small and Charles Bacon Rowley as the Daisy Hill Farm Group for the Van Sweringen brothers. Mark Ferguson provided a sympathetic design for a new house that replaced the 22-car garage that was part of the original group. The graduated cedar shingle roof of the historic barns and rambling outbuildings were restored and renovated under the close supervision of the Owner, Architect, David Ellison, and project manager, Mark A. Murphy. Special landmark legislation and an inspired owner allowed the property to be conserved and prevented it from being broken up into the typical 5-acre lots now required in the village.

Cleveland architects, Philip Small and Charles Rowley, active from 1921-1928, may be better remembered for their designs of Shaker Square, Moreland Courts, The Country Club and The Greenbriar Hotel in White Sulphur Springs, West Virginia. While the Van Sweringens were alive, Small and Rowley acted as their architects on many of their private commissions, including their suite inside the Terminal Tower and their home, Roundwood Manor, also at Daisy Hill in Hunting Valley. The farm complex includes extensive examples of the work of the late Gates Mills mason, George Brown most notably a stone turret and bridges over moat-like Luce Creek.

The collection of buildings that make up this 20th century agrarian folly is reminiscent of French manoirs and moated English farmhouses, with its dovecote tower, stone bridges and almost fortified courtyard. In the 1990’s the buildings began to fall into disrepair. The village of Hunting Valley made special provisions to allow their redevelopment as historic properties with the hope that they would be preserved for future generations. The current owners bought the property in July 2000. After careful documentation of existing conditions and the preparation of the design for the new house, work began.

During the following years, extensive restoration work was undertaken on the signature-style stonework, the graduated cedar shingle roofing with its many cupolas and the old stables. Parts of the old complex were razed, while doors, beams and other materials were salvaged and a new house rose in place of the old garages. As the buildings came back to life and the new home took shape, overgrown landscaping was pruned back, gardens were restored and new ones were conceived and planted by Maggie Williams of Brighton, England.

The Owner of the property, who commissioned the project and took on the role of General contractor, commented, “Ferguson’s office provided the basic design direction for us, while David Ellison helped us develop ideas and carry them out. We couldn’t have done the project without each of the players, including Pat and Anne, and my project manager, Mark Murphy, who coordinated the bidding and contracting process. I think we maximized the value of what each person brought to the table, and we had a lot of fun at the same time.”

In speaking of the project, Mark Ferguson said, “David Ellison was essential to the success of the project. Not only did he share our deep experience with traditional architecture, but he shared our values, our vision and our dedication to our client.”